Half Century of Proven Solutions

Landoll Company, LLC has been providing proven solutions to our customers for over 55 years. With a worldwide customer base, we continue to supply our customers with products of the highest quality materials and workmanship.

From the very first line of farm equipment to the very latest lines of products, we continue to develop products that exceed our customers’ expectations. Whether it is farm equipment, trailers, forklifts, or construction equipment, Landoll offers a solution. 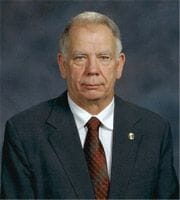 Since 1963, founder, owner, and President of Landoll Company, LLC, Don Landoll, has provided a vision for the company focusing on “Customer Comes First” philosophy.

Don’s commitment to customer satisfaction is still very much in effect 55 years later. This approach has helped build the long-standing, stable relationships that Landoll Company, LLC shares with our customers.

Over 55 years ago, Don Landoll and his partner of three years purchased Quick Service Welding which eventually became Landoll Company, LLC. Since then, Landoll has grown to be a leader in innovative design, world-class manufacturing, and marketing of quality products and services for the agriculture, transportation, material handling, OEM and government industries. Since 1963, the Landoll entrepreneurial spirit and business principles including diversification, vertical integration and customer satisfaction have led to substantial growth.

Landoll Company, LLC has shared its success with the community by being good stewards to the area community, renovating and putting into operation several vacated properties. Landoll led the revamp of the now completed Catholic school and playground, airport, Library Park, and a reading garden at the elementary school. Landoll Company, LLC was the largest donor while leading fundraising efforts for the area’s new hospital and is now beginning work on the Catholic church.

Landoll Company, LLC is proud to be one of Kansas’ homegrown industries.

Landoll Corporation was recognized by the Small Business Association (SBA) as the National Small Business Prime Contractor of the Year in 1986. This award recognizes integrity, reliability, initiative, and capability, and is only bestowed on one business in our nation annually.

Landoll Corporation was awarded a certificate for outstanding performance as an Operation Desert Shield/Storm contractor by the Defense Contract Management District North Central. Only 6 contractors in a nine-state area received this prestigious award.

Landoll Corporation received the Pro Patria award in 1996, for support of the National Guard and Reserve.

As a result of this achievement, the Department of Defense Contract Management Command (DCMC) presented Landoll Corporation with the government’s Quality System Qualification Certificate.

Don Landoll was recognized as the mid-western recipient of the prestigious Ernst & Young Master Entrepreneur of The Year Award.

Landoll Corporation won the Governor’s Exporter of the Year Award from the state of Kansas. This award is presented to a Kansas company that has demonstrated exceptional marketing prowess outside of the United States.

Don Landoll, his partner, and one hired man opened Quick Service Welding Company on December 16, 1963. The business began as a typical welding, radiator repair, and black-smith shop. However, Don said, “From the beginning, we had the idea we wanted to design and manufacture things of our own.”

In the summer of 1967, Don’s partner returned to work for the Railroad, and Don became the sole owner of the Quick Service Welding Company. Shortly thereafter (1968), Don designed his first branded products, a slip-in livestock rack for pickup trucks and a chisel plow for use by local farmers.

By 1969 the company became more diversified with the addition of more farm equipment and equipment trailers.

In 1970, an innovative traveling axle ground-loading trailer was designed. Landoll was granted numerous patents for this new design. This ingenious trailer is the backbone of the current Landoll Corporation trailer line.

To produce the new trailer and tillage lines in the mid 70’s, a WWII radio shop in Marysville, Kansas was renovated to accommodate the growing business. Adjacent to therenovated radio shop, Landoll remodeled, what is today, the Marketing and Warranty Office at 1700 May Street, Marysville, Kansas.

In 1975 the Company was incorporated and changed the name to Landoll Corporation.

By the early 1980’s, the Corporation’s involvement in the towing industry dramatically increased. Towing and recovery companies had become primary customers for the Model 317 trailer and “Centerfold” car carrier. A 94000 square foot building (Shop 10) was constructed to accomodate the company’s growth.

1985 – Larger Shops built for the Higher Demand in Products

1990 – Landoll Produces Products for the Government

Landoll Corporation continues to diversify. The Company manufactured special tank transport trailers for the US Army to support our troops in Desert Storm. Landoll accepted an order on December 22, 1990 and shipped 22 trailers by January 6, 1991. Landoll began manufacturing heavy duty wreckers for the Family of Medium Tactical Vehicles (FMTV) military project in 1992. The company began building specialty warehouse forklifts, under the Bendi and Pivot Mast trade names in 1994.

1994 – Larger Shops built for the Higher Demand in Products

Landoll Corporation “kicked off” 1996 with the formal launch of a Total Quality Initiative (TQM) to continually improve products, services, and processes.

In July after several months of design engineering, Landoll Corporation unveiled an innovative series of Hydraulic Traveling Tail Trailers equipped with many value-added features. The immediate customer response and potential overall impact on the market has made this series of trailers the most successful product introduction in company history.

2000 – Landoll seizes an opportunity with AGCO

In May the agricultural economic depression continued. Landoll Corporation seized the opportunity to enter an agreement with AGCO Corporation of Duluth GA to produce and market their tillage implements. Through the agreement Landoll was also afforded the market exposure of AGCO’s vast dealer network.

In 2006 and 2007, Landoll Corporation began an expansion project that was completed in late 2007. Numerous equipment was added including robotic welders, a waterjet, among many other manufacturing machinery. The square footage of the manufacturing facility was increased to over a half million square feet, ensuring a long term commitment of continuous improvement to customers.

Landoll Company, LLC is committed to total customer satisfaction by providing products and services of the highest quality.